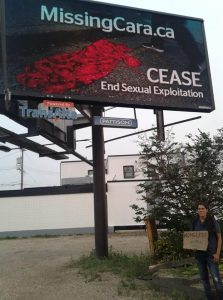 I drove downtown to see my new billboard. It is posted on the SE corner of 111 Ave and 97 Street, best viewed travelling east or south.

Standing a few feet away, her back to me, was a slim girl carrying a sign. She walked up and down the street a couple time before I had the courage to approach her.
“What does your sign say?” I asked.
She showed me, “Homeless. Anything helps.”
“How did you end up homeless?”
She was a beautiful young woman with long dark hair and a scattering of freckles similar to Meghan Markle, cleanly dressed with a sensible back-pack. She was neither drunk nor high, as I feared she might be, and answered in a clear friendly voice. “Bad luck, bad landlord,” she shrugged.
I asked if she was aware of the women’s shelter and other resources. “Oh yes,” she replied and I knew that anyone aware of those resources would also be aware of the restrictions, such as limited cash for personal needs.
She said she was originally from Winnipeg.
“A lot of women go missing from Winnipeg,” I noted. We briefly discussed that city compared to Edmonton and I told her a bit about the website.
“A lot of men try to take advantage of vulnerability,” she agreed. Earlier that evening she had been offered money for services by a man who said he also had a friend with money. She declined and he came back later, much more mean the second time. Whatever her story, I am happy she did not succumb to survival sex.
I asked if she would be willing to pose for a picture in front of the billboard. I offered to obscure her face as I did not want to out her to anyone who might not know she was homeless. She gave permission to use her face and her name, Brandy.
“Please be careful,” I said in parting. “Thank you, I will,” she replied.

Another young lady was much more worrisome. She darted about, obviously high on something, and possibly psychotic as she muttered stories about a recent disaster. She would probably lack the discernment to avoid danger and could easily be exploited or harmed.
A feeling of sadness overwhelmed me as I drove back to my safe, comfortable home. I wish there was an easier answer for women like Brandy and more protection for those like the other vulnerable lady on the street.

Thank you to Pattison for donating the digital billboard to charity. I tend to be skeptical of people who go to fund-raisers looking for a bargain, but the truth is I never would have thought about nor been able to afford this opportunity otherwise.